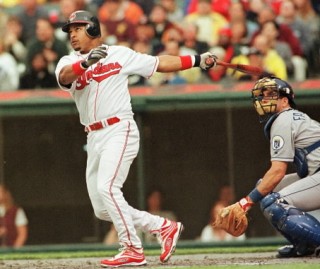 Right Field has been a position of power and pain for the Cleveland Indians over the past ten years. Manny Ramirez started off the decade with a monster year before leaving the Tribe for the greener monsters of Boston. Juan Gonzalez appeared for a year to take Manny’s place, relaunched his stuttering career with a big season of his own, then left for Detroit. That’s when the mashers left, and the deteriation of right field began.

What followed were middling seasons from the likes of Matt Lawton, Jody Gerut, Trot Nixon and Franklin Gutierrez. All showed promise in one form or another, but couldn’t even reach the first rung of the ladder built by ManRam and JuanGone. The fact that Casey Blake had the longest tenure during the aughts in right field should let you know just how “interesting” things got in the hunt for stability at the position. The light at the end of the tunnel closing out the decade has been Shin-Soo Choo, who surely has a head start on the All-Teens team.

With that said, the All-Aught Indians Right Fielder is Manny Ramirez.

Ramirez was as sure a thing as you could be as a prospect. The hitting savant won the 1993 Minor League player of the year, and made his debut with the Tribe in a September call-up in 1993. His break-out season came in 1995, rolling out 31 homers, with a .307 average and 107 RBI. He’d help lead the Indians to their first World Series appearance in nearly fifty years, and he was only just beginning.

Fast forward five more seasons, two world series appearance, and a whole bunch of offense. Ramirez entered the decade with 198 career home runs, a career .307 average and back to back seasons in which he hit 89 homers and had 310 RBI. The only thing stopping Ramirez from becoming the preeminent baseball player was, well, Manny being Manny.

His career in Cleveland culminated in 2000 with one of the best seasons of his career. The only thing that could slow Ramirez down that season was a bum hamstring, which kept him out of the line-up for the entire month of June, and through the all-star break in July. Even while only playing in 118 games, Ramirez still hit 38 home runs, with 122 RBI. His line was a Babe-Ruthian .351/.457/.697, with a 1.154 OPS. The Indians finished second in the division and a game out of the wild-card slot, leaving Ramirez out of the playoffs for the first time as a regular with the Indians.

Ramirez was always regarded as the ‘kid brother’ with the Indians, to the players and the fans. I can’t recall more than two words being spoken at a time by Ramirez with reporters, since he followed in the footsteps of his mentors, Eddie Murray and Albert Belle, who both refused to talk to the media. We’ve all heard the stories, with my favorite being the five-figure paycheck from the Indians he’d left lying around in a pair of boots in his locker, unchashed. If it was about baseball, Ramirez was Einstein. If it was about anything else…well…

Ramirez left the Indians in 2001, and never felt the wrath that Albert Belle before, and Jim Thome after, had felt. The Indians chased after their slugger, offering an obscent 8-year, $136 million contract, which the Red Sox then outbid at a even more obsurd 8-year, $160 million deal. Even though Manny left for the cash, most of the anger was slanted towards agent Jeff Moorad.

Manny was, of course, just being Manny….