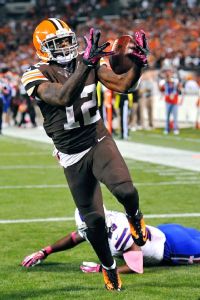 This weekend was a horrific mess of circumstances here in my little slice of Cleveland away from home. We had playdates and birthday parties and sleepovers and horses and dinner dates to contend with. When you toss in the biggest East Coast parade not located in New York City or Orlando, you have one massive conundrum of hoopla, sleep, running around, crying and did I mention sleep?

As crazy as things were here in my own version of the North Coast Carolina, they were relatively silent back in Cleveland with regards to the Browns, the Indians and the Cavaliers.

Unless you throw in the fact that it’s Pittsburgh Steelers week, or the fact that the Indians made their first move of the offseason, or that the Cavs are in a spiral of struggle after getting rolled by San Antonio on Sunday night.

Yeah, it can only mean that it’s the holiday season, and with Thanksgiving and Michigan Week about to take over here, let’s get driving, before I fall asleep from the Turkey.

It’s Steelers’ week, and while that has generally meant a lot more to the Browns in recent years than the Steelers, it’s still the Browns’ top rival. I’ve been to many, many games at Cleveland Stadium involving these two teams, and I’ve seen some of the most amusing exchanges between fans. My favorite memory is of a ‘Terrible Towel’ waving fan sitting in front of me during halftime of a 1984 game between the two teams. The Steelers were up 7-0 at that point, and he was taking particular glee in waving the towel as though the Steelers had won the Super Bowl that very afternoon. Several minutes later, he was literally carried off by a contingent of pre-Dawg Pound Browns’ fans. He never returned. The Browns went on to win 20-10.