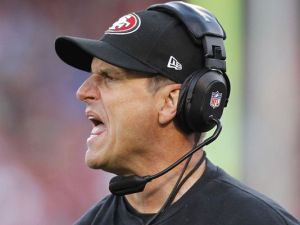 The Cleveland Indians made a bold move at the tail end of the 2012 MLB season. With Manny Acta losing control of a team with a dearth of talent and depth, Indians’ GM Chris Antonetti fired his first official coaching hire and went for a home run. In his sight was a good friend who just happened to be a former two-time World Champion manager, Terry Francona.

Mark Shapiro will never admit to this, but I firmly believed then (and now) that had Antonetti missed on Francona, he would have followed Manny Acta out the door in quick fashion. I know there are conflicting reports, but you don’t have to use your heads to much to realize just how true it likely was.

Francona signed with the Indians, and the rest is history. The Indians front office went from a local joke to garnering more respect, free agents were signed, and the Indians righted the ship in quick fashion.

Fast Forward to 2013. Joe Banner and Mike Lombardi made a bold move at the tail end of the 2013 NFL season. With Rob Chudzinski reportedly losing control of the Browns’ locker room, the team president and general manager fired their first official coaching hire and apparently went for a home run. In their sight was a coach who had back-to-back trips to the NFC Championship game to go along with a trip to the Super Bowl after the 2012 season, Jim Harbaugh.

The deal was more complicated, since Harbaugh still had two seasons left on his contract, and the Browns would have had to offer draft pick compensation, but the theory was still the same. Go out and sign a big name coach, bring respectability on the field to a team that has looked like the Keystone Cops of the NFL, and in turn, save a couple of jobs.

It explains so much.

It explains the firing.

It explains the lag time.

It explains the “patience” from the front office.

Seriously, it was likely Harbaugh or a permanent vacation. There weren’t any other home runs out there to be had, so this was their Terry Francona.

In the end, Harbaugh said no. You can insert 100 reasons why he wouldn’t want to change teams, but it likely started with front office stability (saving Banner and Lombardi meant working for them), ownership stability and a team that will again be knocking on the door of the Super Bowl next season.

Banner and Lombardi likely held on to finish the job of hiring the best coach that would take it, then were relieved of their duties after another failure.

In the end, Pettine was a solid choice, but leave it to the Browns to add this sort of wrinkle and miss into the equation.

But how fun would that have been? Coaching the Browns: Jim Harbaugh. Coaching the Ravens: John Harbaugh. How long would it have been before both were having a sibling throwdown at the fifty-yard line at FirstEnergy Stadium?

We can only dream… 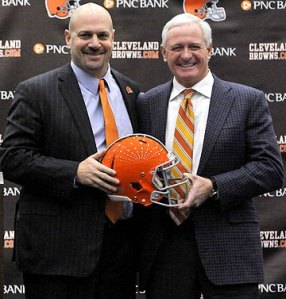 I should be talking about Love and Wonder and Happy-Happy, Joy-Joy…

The Browns make me mean. I love dogs and sunshine and spending time with my kids. I smile a lot, am fairly laid back, and I like to joke around.

Then mention the Browns and things change quickly.

Watching the Browns’ are akin to choosing to boil your hands in a pot of 300 degree water.

They have a great receiver and a fantastic tight end. Their offensive line is better than most. They have a really good set of defensive players. They had five pro-bowlers for crying out loud!!!

THEY SHOULD WIN, but they don’t.

You want to talk about making me surly?

Mention Jimmy Haslam and this wrecking-ball approach that he’s taken in his 18 months at the helm. He’s already fired two front offices and two coaching staffs.

What do you do with that?

Mike Holmgren and Pat Shurmur begat Joe Banner, Mike Lombardi and Rob Chudzinski who begat Alec Scheiner, Ray Farmer and Mike Pettine. Think about that. In 18 months, the Browns have had three head football coaches and five different people running Browns’ operations and personnel, or both.

The Browns have been dysfunctional since 1999, but this is the pure definition of epic?

What are they going to do next, sign Tim Tebow and trade away all their draft picks to move up two spots and take a wide receiver?

Apparently, following the Browns is akin to Bastille Day, every day.

My good friend Brian called me a couple of days ago. He’d been in France, ironically enough, for two months working with his tech firm, and I was truly happy to hear from him. We talked holidays, family, and before three minutes were up, he said, “What are the Browns doing?”

I went blind with rage.

By the fifth minute of our conversation I had used enough unintelligible profanity to make Ozzy Osbourne blush, and in the sixth minute, after Brian had joined me in the obscenity-laden tirade, he said, “Why do we do this every year?”

But I grabbed control.

Farmer and Scheiner were already with the organization, and if they pan out, it shows that Haslam isn’t a complete imbecile when it comes to hiring NFL executives.

This time, it really feels like an owner trying to get it right…right?

Yeah, I know, where’s the pot of boiling water. 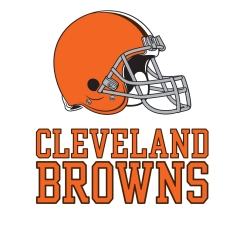 The Cleveland Browns can learn a lot from their AFC North adversaries when it comes to hiring a football coach. There are clearly differences in organizations, but both the Steelers and Ravens made dark-horse hires that ultimately won their teams Super Bowls.

Whisenhunt, Grimm, Rivera and Tomlin had never been a head coach, and Gailey had been the head coach in Dallas for two years, and was the current Georgia Tech head coach. The Steelers’ job was coveted, but the front office focused on names that were High-IQ “fits” for what a Steelers coach should be. The Steelers hired Tomlin, who had overwhelmed the front office in his two interviews as being an intense leader, with a clear picture of what it would take to win football games in the Steelers organization. END_OF_DOCUMENT_TOKEN_TO_BE_REPLACED 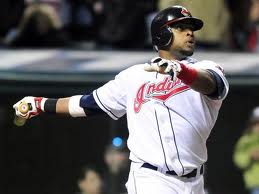 So I had this crazy idea to write about several things that DIDN’T pertain to the Browns, the Cavs or the Indians this week. The void that is now known as the “Browns’ head coaching search” has left me in such a mood, that I felt like moving as far away from sports as possible.

In a few paragraphs, you’ll note that I wrote about…the Indians, the Browns and the Cavs.

I have no freaking clue.

My weekend has been a bust, and it’s been busy, and it’s cost me more money than I can begin to tell you, but it also left me with tons of time to think about sports, which is what I do when I’m stressed.

I sat back and started thinking about the 80’s in particular, and while my focus was far away from Cleveland sports, it rarely is ever as far as I’d like to think it is.

It was Rickey Henderson, and while people remember the enigma of Rickey, I always remember that August day where he literally came up TO ME and asked me how I was doing.

After that, I followed Henderson, and then Vince Coleman after him. Tim Raines also was fun to watch, as was Willie Wilson. I loved watching these guys just decimate pitchers on the basepaths, and their teams were always such a factor because of it. END_OF_DOCUMENT_TOKEN_TO_BE_REPLACED 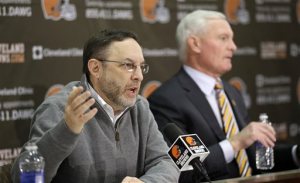 But somehow, none of that matters.

Confused yet? Fortunately for all of us, confusion is the name of the game with the Browns since 1995. We aren’t all witnesses, we are all walking callouses.

Cleveland Browns fans are passionate about their team, and that may be the understatement of all understatements. It’s been a strange road that has only been enhanced by the team leaving back in 1995 when Art Modell owned the team. It was enhanced further when they came back, played badly, and drafted badly…over and over and over again.

Thoughts of Tim Couch still ring in my ears, and he may have been one of the better quarterbacks the Browns have drafted.

The Cleveland Browns brand-name is virtually untouchable, and the owner and the president and the GM know it. I have visions of these three sitting together during planning meetings just laughing, knowing that they could retire Brandon Weeden‘s number tomorrow, and still likely sell out the opening game of the season next year if they announced it as “Brandon Weeden day.”

It’s not just in Cleveland, but the market on the North Coast is so uniquely tied to this team, that there’s something special about this hostage mentality. Perhaps we all have some form of Stockholm syndrome, in which we’ve bonded with these idiotic front offices that we’ve grown to despise so much over the years.

Cleveland teams don’t win titles, but Cleveland fans want a title so badly, that these ownership groups really can do anything they want, and fans will keep coming back. In many ways, there’s been an embracing of the “what’s next” mentality, so that when weekends like this come up, fans actually say, “Meh, it’s just Cleveland.”
END_OF_DOCUMENT_TOKEN_TO_BE_REPLACED