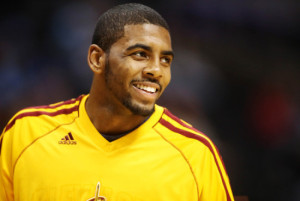 It was bound to happen.

At one point or another, someone was bound to report that Kyrie Irving wanted to leave Cleveland. If you want to be honest about it, someone already did report that Kyrie Irving was going to leave Cleveland long before Chad Ford made his flippant comment yesterday in his online chat. I seem to recall CBS Radio’s Brandon Tierney saying the same thing.

The point is that at the end of every season, when Cavaliers’ fans take stock of the team, the first question everyone asks is, “Is he going to leave?”

It’s what happens when the greatest basketball player in all the land grows up an hour from Cleveland, gets drafted by his “hometown” Cavs, nearly leads them to the Promised Land, then toys with the fans for year before taking his talents to South Beach.

I don’t blame LeBron for leaving. That was his right. But Cleveland fans are now gun-shy with their meaningful basketball players.

“Is he going to leave?” END_OF_DOCUMENT_TOKEN_TO_BE_REPLACED