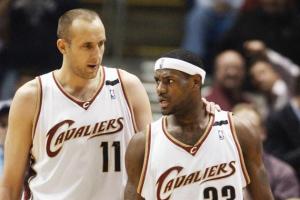 LeBron and Z during the good ole’ days (Tony Dejak/AP)

It’s a phrase that’s often uttered in reference to our favorite sports players.

To some, it’s more hyperbole than anything else.

To others, it’s a right of fan-dom. If there’s a player you love, you treat him above all else.

In Cleveland, nobody had epitomized the term hero-worship more than LeBron James.

If you’re reading this, there’s no reason to go into too much detail with regards to LeBron’s history. He grew up in Akron, less than an hour from Cleveland. He led his high school, St. Vincent-St. Mary’s to three state championships and one national championship. He declared for the NBA draft, and when the Cleveland Cavaliers won the right to the first pick that year, words such as Kismet and Destiny were uttered more than once.

His career in Cleveland was special, but certainly not perfect. Yet, Cleveland Cavaliers fans realized that for perhaps the first time in many, many years, the best player in the world in a major sport played for a team with Cleveland stitched on the front. END_OF_DOCUMENT_TOKEN_TO_BE_REPLACED