This column is merely a short and simple assembly of stats, observations and preponderances from the past week as well as what is just around the corner.

On Justin Masterson and velocity.

A lot has been made of Masterson’s decreasing fastball velocity and its overarching effects on his ability to pitch efficiently and productively. So I grabbed a handy little velo chart to take a quick and relatively vague look at it as a     potential issue. 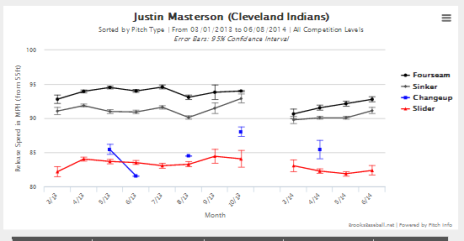 Obviously pitch velocity is down but perhaps not as drastically as we have been led to believe over the past month, which has a occurred for a few reasons. First people have been comparing his early season velocity to last years full season velocity. What is most clear is that his velocity generally increases in the early months and the flatlines with negligible movement to either side of the mean for the remainder of the season.

Secondly, on his most used offering the sinker or two-seamer the velocity decrease is not nearly as drastic of a differential. In fact, in June of 2013 Masterson’s sinker was at 90.92, in his one June start in 2014 it was at 91.12. In May 2014, it was a little more than 1/2 a MPH slower than 2013, which is a relatively minimal difference.

Obviously velocity has been an issue for Masterson but it has become overplayed, hiding the other issues which face him. Th first issue being he is a ground ball pitcher in front of the worst infield defense in baseball; the second being control issues which spot up for him from time to time.

Unfortunately for Masterson and other Indians starters, rectifying this infield defense is not under their control

Currently an Attorney. I have been fortunate enough to be published at Fangraphs, The Hardball Times, The Athletic Cleveland, WaitingForNextYear.com and Marquette Sports Law Review. Follow @snarkyhatman