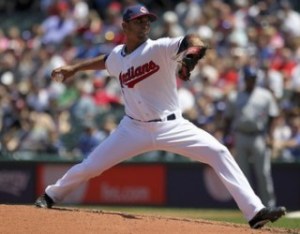 In this week’s Spin Cycle, we are going to continue to take a look at the starting rotation, where the one tangible hole on the 25-man roster remains. While it’s vital that the Indians address the #5 spot in the rotation, what happens in the 1-4 slots may be equally important. While the Indians seem to have those spots locked down with Justin Masterson, Danny Salazar, Corey Kluber and Zach McAllister, there are questions that remain.

Before we get there though, let’s take a look at last week’s Spin Cycle, again, with interesting results.

Last week, we took a look at who the Indians #5 starter would be between Carlos Carrasco, Shawn Marcum, Josh Tomlin, Trevor Bauer, or by a potential move that had not been made yet. I was purposely vague on what that move might be, thinking that it could either be a big money signing, like Ubaldo Jimenez returning, or another minor league contract.

There was no clear majority, yet again, for the results, but there was a fairly clear cut between what Indians’ fans want, and what they likely don’t want. The top two results garnered 58 ½ % of the total voting, so it’s clear that there’s an arm that most want to see succeed, unless the Indians go about getting another proven arm.

Carlos Carrasco topped the list with 32% of the total vote. Carrasco is always an intriguing option, but really has been living off of the promise of his former stud status as a prospect from his Phillies days, and a scintillating stretch of five game stretch in June of 2011 in which he went 4-1, with a 0.98 ERA, over 28 2/3 inning, striking out 28, while only walking five. There were three starters ahead of Carrasco during that same stretch, and two of them were Cliff Lee, the player he was traded for, and Justin Verlander, who would go on and win the Cy Young that year (Lee finished third that season).

Carrasco would go on to struggle through July and a start in August, before getting shut down after his one August start thanks to some elbow inflammation that had shown up during a bullpen session. Rumors circulated that the arm had been hurting for much of July though, but with Carrasco having finally found himself during that stretch of June games, the righty didn’t want to lose a spot he had been battling for during the preceding four seasons in the minors and the majors.

Carrasco had been on the DL on April 24th of 2011 with similar elbow pain.

While his promise and pure “stuff” is unquestioned, Carrasco has been a head case on the mound over the years once he’s reached the big leagues. Going back to the 2011 season, Carrasco was ejected placed on a five-game suspension for a start on July 29th of that season when he threw a fastball over the head of Royals DH Billy Butler after Melky Cabrera launched a grand slam to right, giving the Royals a 7-0 lead.

In Carrasco’s first game back after Tommy John and serving his five game suspension, he beaned Kevin Youkilis in the top of the fourth inning after Robinson Cano had crushed a two-run homer to deep left-center, giving the Yankees a 7-0 lead.

Carrasco struggled in the starter role last season, but returned late in the season as a reliever and was extremely effective, speculating that Carrasco would be a back-end option in 2014.

Coming in second in the voting was “a move that is yet to be made,” garnering 26% of the overall vote. Without knowing what direction that Chris Antonetti may go in here, I think many were hesitant to pick this option. The Indians’ GM has already signed Shawn Marcum to that minor league deal, and I don’t think many fans want to see the Indians hunt for another Scott Kazmir at this point.

Shawn Marcum, Josh Tomlin and Trevor Bauer all received less than 16% of the vote, but all received more than 10%, so most had some momentum, showcasing that as of now, this really is a wait and see position. There’s a long way to go before Pitchers and Catchers arrive, and three full months before the season begins, so plenty of time for moving and shaking.

Today, we are going to take a look at the most pivotal pitchers in the Indians rotation heading into 2014, and that’s Danny Salazar. Jim Piascik took a quick look at Danny Salazar’s historical 2013 season, debating whether or not he would return to that form or not. He takes a close look at the rarified air of Salazar’s season in that only seven total pitchers (including Salazar) since 1903 “have posted between 1.0 and 1.5 fWAR with the ERA to match this early in their careers. Then projects forward.

At the end of Piascik’s piece, Jim ultimately notes that predicting Salazar’s future based on the 52-inning sample size isn’t easy to do, but does point to a short-term likelihood of having a really good second year, passed that, he could either turn into Steve Carlton (who can forget his defining moments as a member of the Indians), or Steve Busby.

Michael Hattery also tackled the Danny Salazar question in his Halloween edition of Trend Spotting. Michael addresses the unknown with regards to health rather adroitly, noting that the Indians were so concerned about the health of his arm that they never shut him down. He also notes that Salazar’s secondary offerings (his changeup against lefties, and his slider against righties) are each plus pitches. Salazar dominated lefties last year with his fastball-changeup, and was slightly above average against righties, with his fastball-slider combo, but should continue to improve.

Hattery notes, like Piascik, that predicting forward for any pitcher is unpredictable at best, but asserts that Salazar is on the precipice of becoming not a #1 starter, but is poised to become an ace. The key is health, and a continued progression of his already impressive secondary offerings.

This leads us into today’s Spin Cycle, and we are just going to focus on a very simple question: Will Danny Salazar be a legitimate Top of the Rotation starter in 2013? Don’t forget to defend your selection by commenting below.