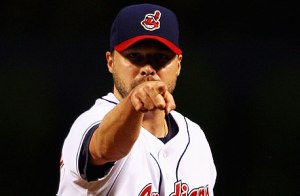 Jake Westbrook came to the Indians as the main piece from the New York Yankees when the Indians dealt David Justice to the Evil Empire in June of 2001.  Westbrook had been a number one pick by the Colorado Rockies in 1996. He was dealt to the Montreal Expos a year later in a deal for Mike Lansing, then traded to the Yankees two years after that for Hideki Irabu.  While Westbrook may have lost a bit of the shiny goodness that comes with being the #1 pick, he ended up being the glue of the Indians’ rotation for the better part of the decade.

Westbrook’s first three years with the Tribe were fairly uneventful.  He spent most of the first two years with the Indians working out of the bullpen, making only ten starts out of his first 34 appearances.  His ERA with the lack of work was 5.84 during that streatch, and it looked like the Tribe had ruined another pitcher by yanking him around from the pen to the rotation, and from the minors to the majors.

In 2003, things began to change for righty, in that the Indians began to utilize him primarily as a starter. Nine of his first ten appearances that year were in the rotation, but he really struggled in May, when he gave up 16 runs in 9 1/3 innings over three starts. He moved back to the pen for the month of June, then was sent down to Buffalo to make a couple starts at the beginning of July. He was dominant, and didn’t give up a run or a hit during ten total innings, and returned to the rotation for Cleveland on July 12th, and closed out the season back as a starter.  The tenacious Westbrook finished the year with a 7-10 record, and a 4.33 ERA.  He started 22 games, relieved 12, had his first complete game, and pitched 133 major league innings.

Westbrook actually started the 2004 season in the bullpen because of an injury to closer Bob Wickman‘s injury, but it was the last time he spent in the bullpen during the Aughts with the Indians.  Westbrook moved back to the rotation by the end of April, and essentially serve as the ace of the staff once he stepped into the role.  His first start was a complete game victory, and Westbrook led the majors with five complete games that season, finishing 14-9 with a 3.38 ERA.  His ERA was the third lowest in the A.L., and he pitched a career high 215 2/3 innings.

Westbrook continued his steady hand in 2005 and 2006, winning 15 games in each season.  He definitively wasn’t as dominant in each season, but he quickly became the Indians most reliable starter. During that three year period, Westbrook went 44-34 with a 4.01 ERA, and the Indians began to consider signing their rotation anchor to a long-term deal. He signed a three-year, $33 million deal with the Indians prior to the 2007 season, which acted as a four-year contract, as it included the 2007 season’s arbitration year.

Like clockwork, Westbrook struggled in 2007 to start the year off, going on the DL on May 2 for nearly two months.  He struggled prior to the DL-stint, but when he came back, he pitched some of the best baseball of his career.  During the second half of the season, Westbrook went 5-5 with a 3.44, but in August, had a league best 1.90 ERA, while gong 4-1.  In the playoffs, Westbrook was the only starting pitcher to struggle against the Yankees in the Division series, but he flipped that around against Boston, as he was the most consistent starter in the ALCS, going 1-1 with a 3.55 ERA in a losing effort.

Westbrook only started five games for the Tribe in 2008, and they turned out to be his last starts until the 2010 season.  Westbrook had been lights out during the spring, and this carried over to the regular season.  He started the year off at 1-2 record, but had a 2.73 ERA.  Westbrook eventually went on the DL, then rehab, then made one start that was decent, but got pulled.  He underwent UCL surgery in June, and didn’t start again for the Tribe until 2010.

Overall, Westbrook went 63-62 with a 4.25 ERA, in 158 starts for the Tribe.  He wasn’t the Tribe’s best pitcher of the decade, nor did he pitch the most games, but he certainly was the glue that kept this staff together over the long haul.