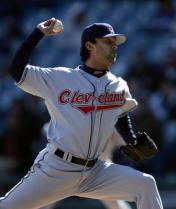 David Riske didn’t have the flair for the dramatic, and when you think of relievers, Riske’s name likely won’t jump out at you.  Still, for most of his five-plus years with the big league Indians, he was one of the most consistent relievers in the pen.

Riske’s primary role over the years was as the eighth inning, right-handed set-up man, but he showed up in the box score wherever the Tribe needed him.  He even spent a small chunk of time as their primary closer, in what was perhaps his best year, in 2003.

Riske gave the Indians obvious bang for their buck, but he also just happened to be their most consistent closer over a five-year stretch, including two near-dominant seasons.

The All-Aught Indians relief pitcher #2 is David Riske.
The Indians selected Riske in the 56th round of the 1996 draft.  Obviously, when they picked the big righty, they didn’t exactly expect him to become much of a player.  It’s not like 56th rounders traditionally have 10-year careers. Riske brought a low nineties fastball, but his bread and butter pitches were his plus slider, and his split-finger.

Riske’s first cup of coffee with the Tribe was in his third professional season, in 1999, and it was far from successful.  In his first six games, he gave up 10 earned runs, and watched his ERA balloon to 13.  There was still some improvement, as Riske only gave up three earned runs in his last six outings, dropping his ERA by four earned runs.  Still, his overall numbers weren’t that good.  In 14 overall innings, he gave up 20 hits and 15 earned runs, while going 1-1 with a blown save.

The 2000 season was a lost year for Riske, spending the year either on the IR, or in the minors.  He ended the year with a torn labrum, on the 60-day DL, and on a surgical table.

Riske turned the corner in 2001, joining the Indians in late June for a game, then joining the Big League team for good in late July.  He was simply dominating, and set up the tone for the rest of his Tribe career.  He made 26 appearances, and pitched in 27 1/3 innings.  He gave up only 20 hits and six earned runs, while walking 18 and striking out 29 batters.  He went 2-0 with three holds and a save.  He only had one game in which he gave up more than a run, and only gave up runs in five of his 26 games.  In the division series, he made three appearances against Seattle, going 3 2/3 innings.  He didn’t give up a run.

In 2002, Riske struggled throughout the season with injury.  He did start the season off like a house of fire, not giving up a run in his first eight outings.  He never again gained his footing in 2002, struggling with a lower back strain, and hamstring injuries.

2003 was clearly Riske’s best season.  He pitched so well, that he finished the season as the Tribe’s closer.  Riske struggled to start of the year, with an ERA of 12.46 after his fourth outing.  His ERA dropped to 5.40 by the end of April.  His ERA was under 2.00 in four of the next five months.  He was named the club’s closer on August 15th, and went seven-for-seven in save opportunities.  Overall, he went 2-2 with eight saves and had a 2.29 ERA.  He added 17 holds, with a .196 average against overall (4th in the league).  His .138 average against lefties was tops in the league.  Overall, he pitched in 74 2/3 innings, striking out 82, while walking only 20 batters.

While Riske never again pitched as well as he did for the Indians as in 2003, he was still one of the most consistent relief pitcher in baseball in 2004 and 2005.  In 2004, he started off as the Indians’ closer.  He blew two saves in the first two games of the season, giving up seven runs in the first four games and ten runs over the entire month before the Tribe moved him back to the set-up role.  Other than one outing in May in which he gave up four runs, he was lights out.  He went 7-2 with a 2.19 ERA in his final 60 appearances to lower his ERA 8.62 points to a season-ending 3.72.

Overall with the Tribe, Riske was 17-12 with the Tribe, with a 3.55 overall ERA.  He pitched in 287 games and 317 1/3 inning.  He struck out 318 batters, while walking only 135 batters.  Ultimately, he was part of the trade with Coco Crisp in return for Andy Marte, Kelly Shoppach and Guillermo Mota.  Overall, while not spectacular, Riske did it all.

He was dominant at times, could close, and had longevity, which is why he David Riske is Cleveland’s #2 rated relief pitcher for the All-Aught Indians.